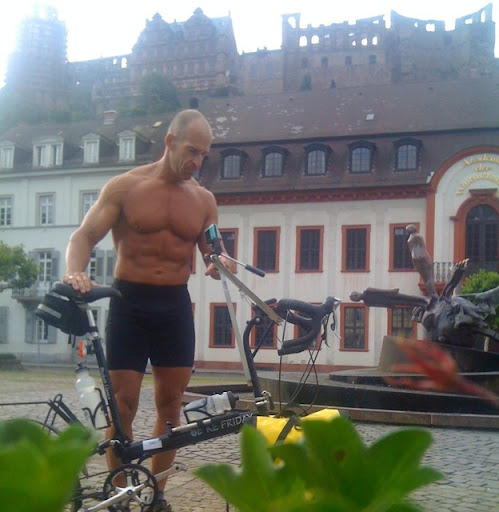 Today I cycled 120 miles, it took 12hrs even though I only made quick stops to buy water. The first 30 miles were easy because they followed the Tauber river, then I started the seemingly never ending climb up the B45. A this point I truly didnt think I could make it because of my cummulative fatigue and the fact that I had to pedal on my heels so I decided to just take it one mile at a time. I just had to do one more mile, after that I could call a taxi if I wanted. The B45 is merciful, it gradual up one side and gradual down the other over the 40 miles or so, at least it wasnt up and down. Then I went along the beautiful Main river. Too bad, both rivers had great riverside trails exclusively for walkers and cyclists but they would have slowed me down too much so I stayed on the “B” roads. Its amazing how bicycle friendly Germany is compared to America. Even though there was no shoulder and the speed limit was high (60mph), I felt completely safe. German drivers know how to drive safely around bikes, maybe because they are all bike riders themselves. If there is an oncoming car, they will slow down so they can pass the bike as if it were a car. In America by contrast, at best, drivers just ignore the presence of the bike completely. At worst, thru ignorance or anger, they dangerously startle cyclists by honking, shouting, throwing things, or swerving dangerously to the cyclist like it was just a video game.

Perhaps the difference is that in America driving a car is a God given right where in Germany it is a priveledge. In Germany they seem to take pride in how precisely and skillfully they can drive. In America drivers take pride in being able to talk on the phone, sip their coffee, change the radio station, and wipe the druel off their kids chin all while steering with their knee.

Anyway I safely made it today, again nobody has recognized me yet and offered me a shirt! This photo was taken in Heidleberg.

previousWorking around injuries
nextCan you gain muscle if you do cardio?