In the dark ages of nutrition (1980-2000) fat was a four letter word and low fat diets were all the rage.  The less fat the better.  Turns out that fat IS important, but not just any fat.  There are certain fats that are definitely bad, like those cheap trans-fat partially hydrogenated vegetable oils found in all the snack foods at the store.  Then there are the fats in the middle that people still argue about, then there are the really good fats .. like the Omega-3 fatty acids.   We now know that getting enough omega-3 fatty acids are critical to good health and in addition, could very well play a role in our ability to gain muscle and lose fat.

Most people know by now that Omega-3 fatty acids are good for them but the mistake many make is in popping fish oil pills.  The less processing the better!  Fish oil loses potency with time and is sensitive to temperature and the way it is processed.  How confident are you that the bottle of fish oil in your cabinet is fresh, was processed and stored correctly, AND that its actually fish oil and not cheap vegetable oil?  “Mistakes” happen.   The thing is, its really easy to get these omega-3 fatty acids in your normal diet and they taste great!  No need to gulp down horse pills.

Why superfoods?  Because each of these is a natural, unprocessed food that has Omega-3 fatty acids but in addition has a plethora of other really important nutrients. First of all, both the flax and chia are seed – not grains, thats why their fat and protein content is so high.  The flax has protein, lots of good fat, lots of fiber, lignans, and  lots of vitamins.  Flax has a nice nutty flavor that works well mixed into oatmeal or sprinkled on your greek yogurt.  Flax is also a really good food for those in low-carb diets, not only because its low carb, but because it contains lots of fiber that those in low-carb diets desperately need.

I really owe Charlie at Sweat4health a huge debt for introducing me to chia. In the 70’s chia was for gag-gifts at parties but it really is as great or better than flax and I now have 6 pounds of organic chia from costco in our pantry!  Why?  I hate the term “superfood” but chia is great.  Yes, its a source of omega-3 fatty acids but its WAY more than that, chia is also a great source of α-linolenic acid (ALA).   As with flax, its also a great food even without that omega-3 fatty acid and ALA because its got healthy fat, protein, lots of fiber, and lots of vitamins.    Again, like with flax, its also a really good food for those in low-carb diets, not only because its low carb, but because it contains lots of fiber that those in low-carb diets desperately need.  Chia is neutral flavored and has a very pronounced thickening effect.  The way I love to eat chia is to mix it 50/50 by weight with rolled oats and then cook the oatmeal/chia mixture.  A hint is in order here.  In a bowl mix the chia, oats and water then let it sit 2 minutes – then stir before putting it in the microwave.  If you don’t stir it before putting it in the microwave … well, don’t do it.

As many of you already know, I am a “pseudo-vegetarian”, I normally get about 95% of protein from things other than fish, beef, chicken, and pork.  When I go out to a restaurant which is usually once a week, I always order Salmon because I view it as the best bang for the nutritional buck.  Yes, it has high quality protein as do all meats but its also got the omega-III fatty acids as well.  People love to argue about how beef fat “is good for you”, maybe, but in my opinion its not *nearly* as good as the fats in a cold water fish like salmon.  Health and fitness is all about making good nutritional choices.  Choose the food that has the best nutritional bang for the buck.

Let’s stop now.  I know many of you are going to choose one of the above sources of omega-3 fatty acids and start nit-picking at it cataloging the reasons that its “not good”.  Let me tell you something, if you restricted yourself to foods that had no known problems then you would STARVE!  What is important is to avoid “putting all your nutritional eggs in one basket” .   I try not to get 100% of any nutrient from one single food. I also try to spread it between plant and animal sources too if I can. Its ultra-important for fat, protein and carbs as well.  What I do for Omega-3 fatty acids is have a dinner sized portion of salmon once a week and then every day have about 50g of flax and 50g of chia.   I have diversified between plant and animal and the plant I have further diversified between flax and chia. Now in 20 years when definitive research comes out that one of my three omega III sources was worthless, I still have gotten some from the other two :)

Its worth nothing that there are several types of omega-3 fatty acids, one is found in plant sources (ALA) and the others is found in animal sources (EPA and DHA). The body can convert ALA to EPA and DHA, but as with all conversions, its never as efficient as consuming EPA and DHA directly.  In other words, you need more of the omega-3 fatty acids from the plant sources than you do from the animal sources.  The other thing is, our research on omega-3’s is still pretty green.  I am not totally convinced that we know precisely how this substance is important to the body nor which form it is thats important.  Again, diversify to hedge your bets!!!

Chia, no longer a gag gift 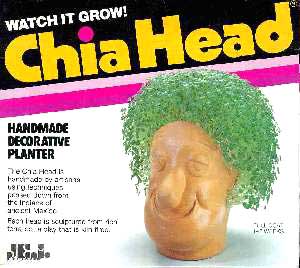